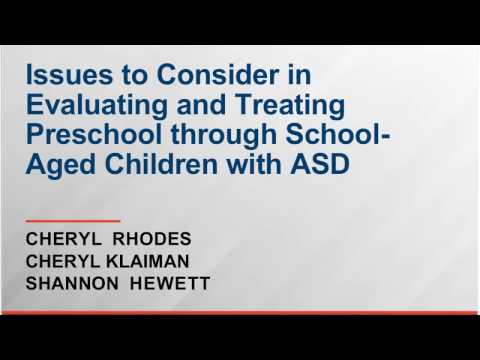 Autism Spectrum Disorder (ASD) is a general name for a group of developmental disorders that cover a spectrum of symptoms, skills, and levels of abilities. New innovations in ASD research has aided providers in identifying the disorder in infants, as well as helping individuals successfully transition between adolescence and adulthood.

Cheryl Rhodes, M.S., LMFT is Director of Care Coordination at the Marcus Autism Center and has over 30 years of clinical, advocacy, research and training experience on behalf of children with disabilities and their families.

Dr. Cheryl Klaiman is a Senior Psychologist at the Marcus Autism Center.  She has been working in the field of autism spectrum disorders since 1993.   She was an Associate Research Scientist at Yale for six years prior to moving to California and working at the Children’s Health Council, where she was a staff psychologist, and then was the Director of the Autism and Developmental Disabilities multidisciplinary team.

Shannon Hewett is a parent of a young child with autism.  She is also a Research Coordinator within the Behavior Analysis Research Core at Marcus Autism Center.   Prior to her son’s autism diagnosis at age 2, Shannon worked as a Behavior Interventionist for public schools.